After using EFT to attempt to heal a particular issue on himself, George found he was not having any success at resolving the issue. George had successfully used EFT tapping for other challenges; however, after three hours of unsuccessful tapping he had reached a block that EFT could not heal. Necessity being the mother of invention, he got the idea to tap for insights. George received the insight to start a tapping group. In the tapping group he tapped for improvements to the process and began building what is now CTT. With input from various great minds.

How do you perform CTT?

Let’s say you have a problem -now really use your imagination here because I’m sure your life is just perfect and you do not have any problems! A problem that you have been struggling to resolve and you cannot seem to figure it out. You’ve looped it in your mind so much and you just do not see any progress. Instead of struggling with it try tapping using the Consciousness Transformation Techniques. Outstretch both of your arms forward as if you’re going to hug someone. Now cross your arms over one another as if you are hugging yourself. With one hand on your upper arm on each side and tap several times on each side in a rhythmic pattern. Tap, tap, tap on the left side with your right hand on your upper left arm a few times. Now pause the left side and tap, tap, tap on the right side with your left hand on your upper right arm a few times. Continue alternating sides with tapping a few times on each side nonstop until you finish speaking the entire tapping script.

What is an example of a CTT Script?

For a simplified example (not a key core issue)we can use the following: while tapping bilaterally, you say out loud “There’s a part of me that knows how to manifest the insights that I need to optimally resolve this problem. That part of my being is willing to inform the rest of me now. It is doing so now with unlimited love, grace and ease. My mind, body and spirit are receiving the love, healing, information, permission and deep insights now.” (take a deep breath now and feel the joy and gratitude) “Information transfer is now complete. So be it. It is done!”

No! Gary Craig has documented very well that you do not have to “believe” in the tapping in order for it to work for you. The same applies to CTT. There is so much to gain with very little effort. You can transform your life in moments. This method also allows you to empower yourself and take strategic targeted action to resolving your key core issues. Working with someone who can guide you to your key core issues is crucial to attaining true resolution and healing. This helps to chip away at the “junk” many of us have accumulated lifetime after lifetime. Thus alchemizing junk into wisdom. This new found wisdom leads to peace and raises your vibration. What once triggered you now becomes neutral and routine. The results will astonish you. Whether you work independently or with George you will see a change and a greater expression of your divinity.

What can CTT be used for?

Over the years of developing CTT George has created various techniques encompassed within the CTT umbrella such as:

CTT is ever evolving and is continuously being upgraded and refined. CTT is George’s passion project and his goal is to seek what he calls “Consciousness Astronauts” which are people that are willing to expand their consciousness and surpass any previously preconceived limitations and access their true potential. There are no limitations to what can be achieved. George volunteers his time to those that are truly committed to healing and expanding their consciousness. He does not charge for his time or his CTT information.

George has worked with many who after healing most of their “junk” have significant breakthroughs and reach incredible mind expansion. One gentleman he worked with began spontaneously remote viewing after about 30 sessions of healing his key core issues. He was able to accurately see in real time locations physically far away from him.

Another woman after working with George to heal her key core issues is now successfully doing surrogate sessions for others and having extraordinary results! I, myself, have only just begun my journey with healing my key core issues and I began spontaneously channeling during a session, which surprised us both! Anything is possible! The key core issue is the root cause that when properly remembered and addressed will powerfully heal and transform your perception. George has discovered we are littered with them! And by cleaning them one by one it opens you up to greater understanding.

How does it feel?

I found myself stunned at the information I received and verbalized during the CTT Sessions with George. My conscious mind wanted to slap labels on things and put them into boxes in order to understand what was going on, yet it could not. This led me to think I was just “making it up”, which is common even in hypnosis work. I was very surprised as my logical mind was doubting even after all of my experience!

As the sessions unfold, I begin to see how the pieces or clues fit together and begin to weave a story. It is so subtle and often begins with a color, flavor or scent, or a word that may baffle the conscious mind initially. As you relax, go with it, get out of your own way, and allow the information to come through, you begin to feel the feelings and the pictures and ideas become sharper.

What still blows me away is the depth of emotion that is evoked within me during each session. My logical mind can say it is make believe all day long but how can it explain or deny the deep emotional reactions that erupt when I have struck the key core issue that has been plaguing me lifetime upon lifetime?! The release is just as profound. CTT is truly a gift for humanity. I encourage you to try it out for yourself.

Check out my interview with George on my Youtube channel, Odyssey of Enlightenment: 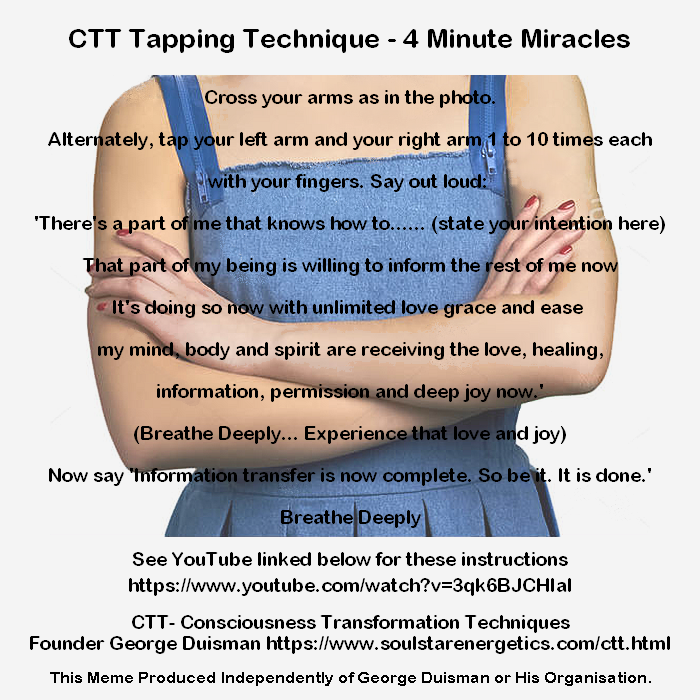 YouTube – The Wayseer Manifesto (A Call to Action – an Anthem)

Breathing Like a Buddhist Monk & How to Do It